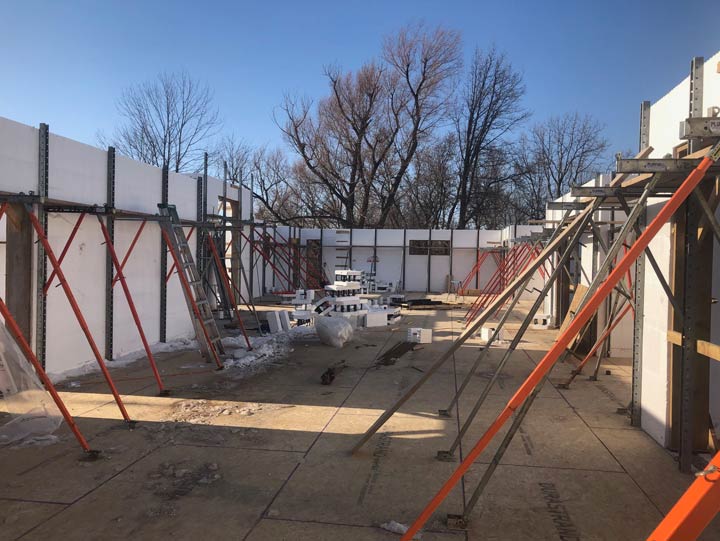 Get in touch with us

Fact or Fiction: "The R-value tells me how much energy my house will use, right?"

R-value measures the resistance a material has to heat transfer, this much is true. R-value alone, however, does not fully describe the energy performance of a building. Everyone in the ICF community knows that ICF buildings far outperform framed buildings with comparable stated R-values in terms of energy efficiency and comfort level, but why is that? Let’s look at the main factors affecting actual energy performance of a building: Thermal Conduction, Convection, Radiation & Mass. Thermal Conduction is the heat transfer through a material by contact of one molecule to the next. This is the only factor an R-value measures.

We have all heard builders claim to build “R-13” or “R-21” walls with wood frame construction. The problem is that only the highest rated component in the wall – the insulation itself – performs at these stated R-values. A wood frame wall is made up of several components, not all of which have the same R-value. For instance, a 2×4 or 2×6 stud has an R-value of about R-5 or R-7. Every 16 inches or so, one of these components breaks the insulation layer and forms a “thermal bridge”, conducting heat through the walls at high rates in addition to being a major cause of mold in standard construction. Adding up the area of studs, plates, and headers, 12% to 16% of the total wall area is an R-5 or R-7 thermal bridge, all detracting from the stated R-value. In addition, batt insulation tends to sag over time and leave spaces without any insulation! How can those builders claim only the highest-component R-value? From a whole-wall perspective, framed walls operate at far lower R-values – sometimes only half of the advertised value.

ICF walls consist of a center cavity to contain concrete between two layers of EPS which provide two largely continuous layers of insulation rated at R-22 and higher. From a whole-wall perspective, an ICF wall actually lives up to the advertised R-values because thermal bridging is absent.
Thermal conduction is not the only mode of energy loss in a building. In fact, conduction often contributes less to energy losses in wood frame buildings than convection, which is not even measured by R-values.

Source of energy loss in a wood frame building*

Thermal Convection is heat transfer by movement of currents within fluids (or gases). When considering energy performance of buildings, it’s the air moving between the inside and outside or “air infiltration”. A common measurement is ‘Air Changes per Hour’ at a blower-door induced pressure differential of 50 Pascal (ACH50). US Energy Star standards for new homes require less than 4-7 ACH50. In comparison, Canadian R-2000 standards are 1.5 ACH50, and Swedish standards are 0.5 ACH50 or less.

Thermal Radiation transfers heat via electromagnetic waves, which for buildings are mostly the sun’s rays. Depending on factors like site & location of the building and the prevailing climate, Passive Solar Building Design helps optimize a building’s absorption and reflection of solar radiation through solar orientation, placement of windows and shading elements, choice of finishes, and incorporation of thermal mass. Thermal Mass refers to a material’s capacity to store heat. Concrete and (Adobe) bricks have high thermal mass, which can act like a battery for heat. The classical use of thermal mass is in desert climates, where outside temperatures swing above inside temperatures during the day and below at night. High mass building shells can store the heat from the outside during the day and release some of that heat to the inside at night – keeping the inside comfortable using almost zero energy. In temperate climates, thermal mass is best used in combination with the principles of passive solar design, e.g. let the winter-sun heat high mass floors through windows.

All of the above translate into significant ongoing energy savings and savings from smaller sized HVAC equipment. Most current residential HVAC sizing software does not consider the effects of thermal mass. In response, the Portland Cement Association (PCA) developed HVAC Sizing software to estimate the required heating and cooling system capacity for single-family concrete homes based on a user-defined thermostat set point, house dimensions, construction materials, and location. Another energy simulation software is “Energy Plus” by the U.S. Department of Energy. *

Getting back to the original questions, the answers are:

“No – the R-value of one component alone does not tell you how your building will perform”. Remember, the Building Code is only a MINIMUM standard and there are many factors that influence actual energy performance.

Yes – ICF buildings far outperform framed buildings despite similar stated R-values”. The secret lies in the combination of reduced conduction & convection, and high thermal mass. The result is a building with a lower appetite for energy and more consistent and comfortable temperatures inside the building.

Every building should be considered from a ‘whole system’ perspective and designed using an integrated systems approach. Besides walls, roof and slab, windows also have a significant impact on performance since they usually make up 10% to 20% of the total wall area and range widely in energy performance. Energy Raters and some engineers & architects now offer energy modeling services that will paint a much more accurate picture of how your building will actually perform. A small investment in a computer analysis helps in formulating the most energy efficient design to save tens of thousands in energy costs, even hundreds of thousands for larger buildings, over a building’s lifetime. Please contact us to get started.